You’ll be on target for hosting the ultimate Nerf birthday party with these fun ideas for making your own nerf games to play. There are three different games that you can make for a nerf battle that are free or cheap using supplies you already have at home. 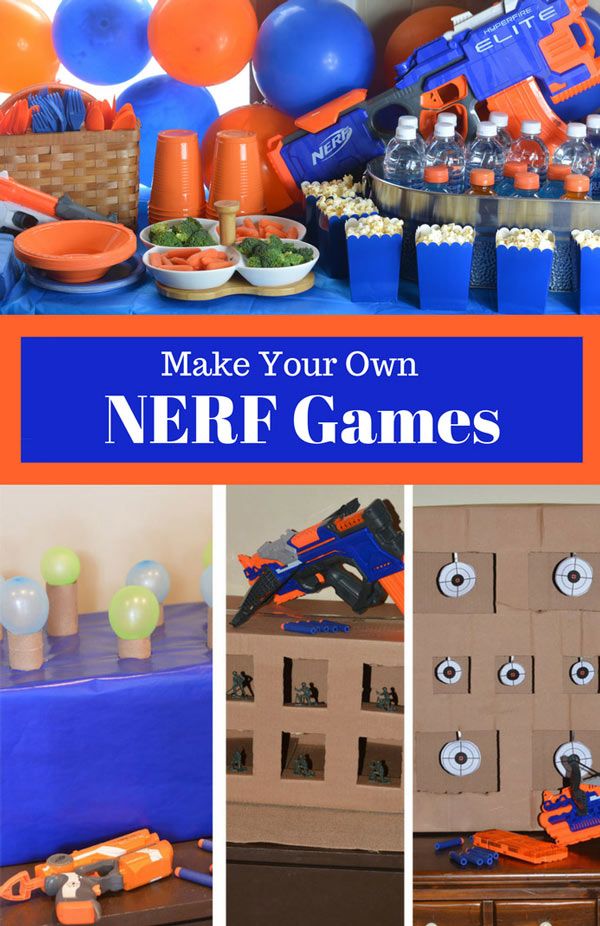 It was no surprise that my children requested a Nerf Birthday party to celebrate their 7th and 9th birthdays. Nerf guns have become popular among the boys and their friends for the past couple of years. I found some unbelievable after Christmas deals at the Walmart clearance section and was able to stock up on guns and Nerf bullets. Nerf Bow Blasters for only $5 each was a huge win.

I also started saving cardboard boxes to make a few nerf gun party games. Since their birthday is in the winter months it had to be held indoors due to the freezing temps and snow. To help save on decorations, I was able to make some games out of cardboard boxes for free. The Nerf Games were not only a huge hit at the party, but they’ve been using them non-stop for target practice in the basement.

Planning a Nerf birthday party? We have three Nerf Games to share:

Host an ultimate party with these 3 nerf game ideas that are all incredibly easy to make. If you’re like me and have an Amazon Prime account, you’ll have no problem stocking up on cardboard boxes in all different shapes and sizes.

Most of the supplies you will already have at home making these Nerf War Games free or super cheap. A trip to the dollar store to grab some army men or balloons, and you’ll have three

All of these shooting games can be played solo or with an opponent. Depending on the number of kids, you can also set up teams of two and keep track of each team members time. One team can play a game, followed by members of the opposing team. Whichever team has the shortest time at the end of the party, or each game, wins. 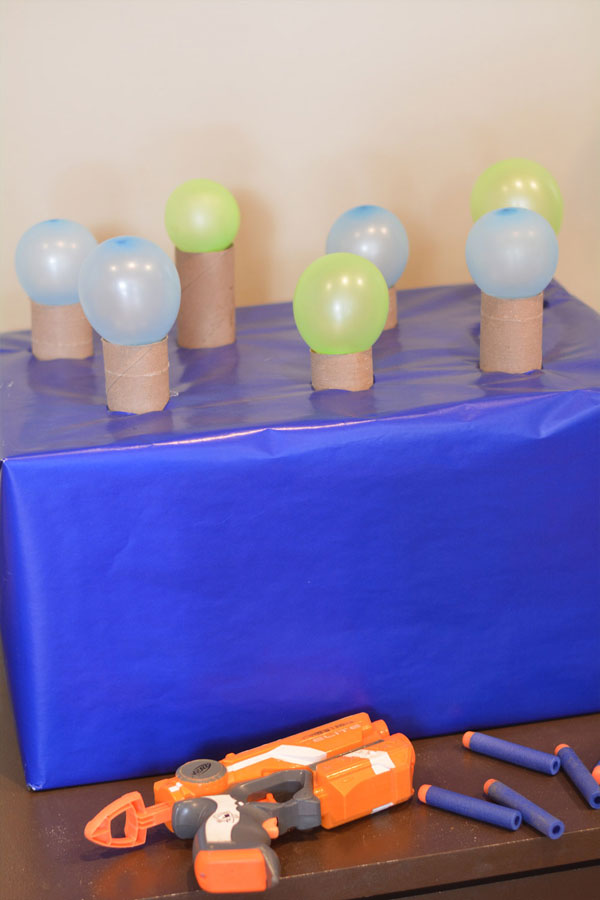 Squeeze the toilet paper tubes into the holes, inserting about 1/2 way down. Insert the paper towel tubes to make the targets higher.

Next, you’ll want to blow up the small balloons, tie closed and place on top of the toilet paper tubes.

You can add color by painting the cardboard box, or covering it with wrapping paper to go with your Nerf party theme 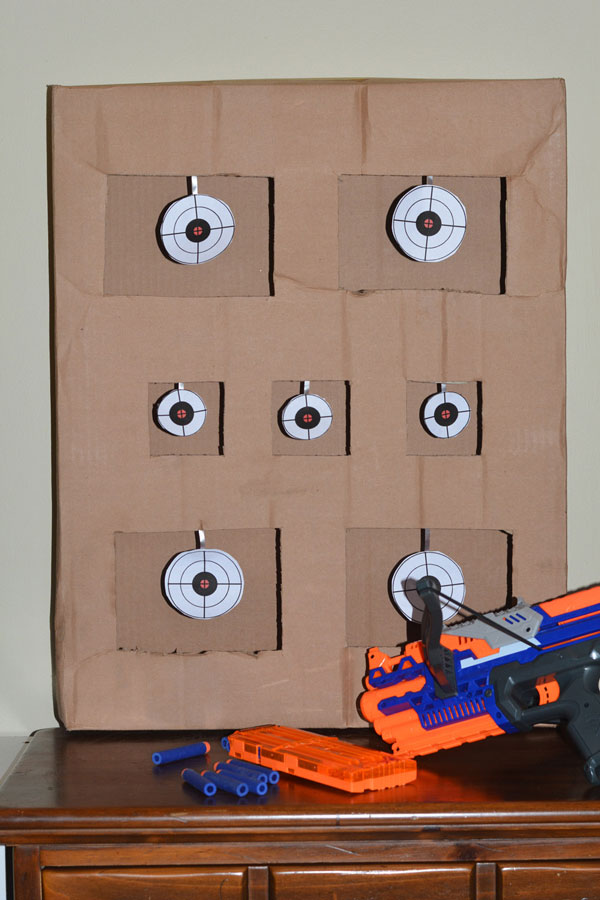 What you’ll need to make this target game:

If you don’t have any army men at home, you can also use LEGO minifigures.

Using an empty cardboard box cut trace six squares, two rows of three. Cut out three sides of a square, leaving the bottom intact. Fold over the square and tape to make a platform for the army man to stand on.

Each player can put their shooting skills to the test, and see who can knock down all of the army men in the shortest amount of time.

Two players can go head to head with their nerf blasters and see which player can knock down the most. 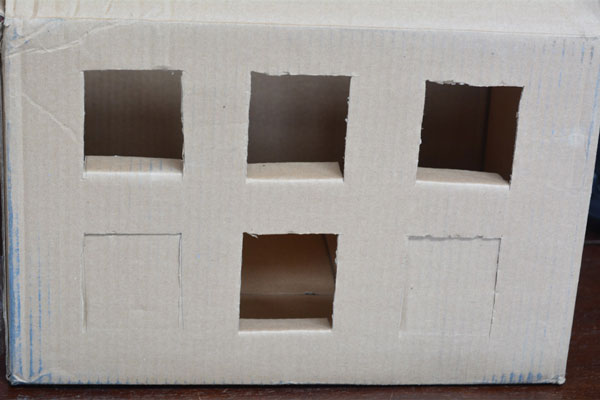 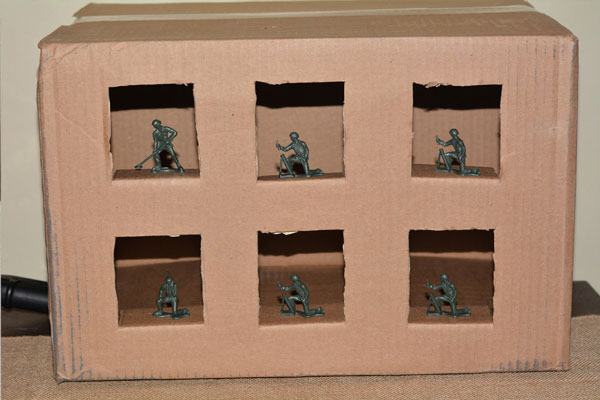 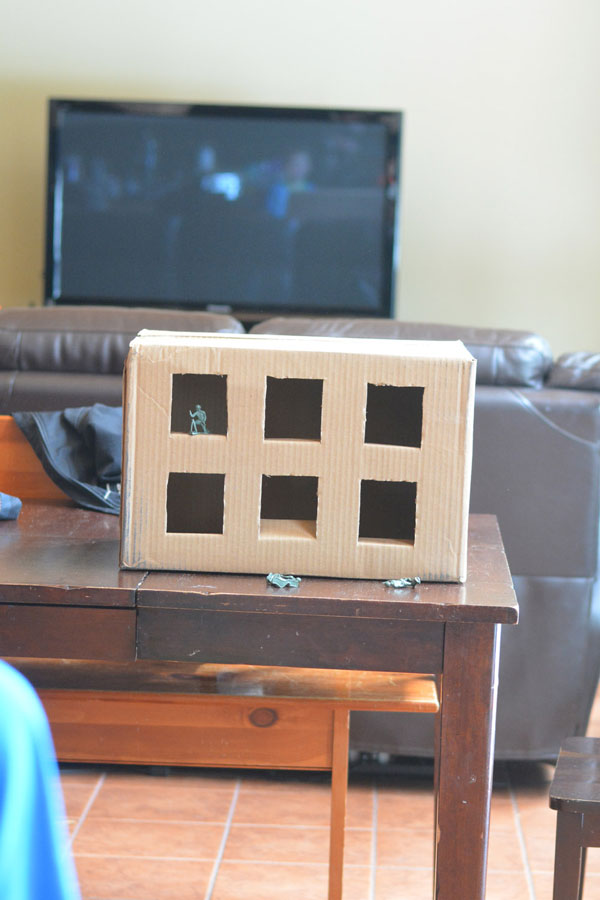 Set up a Playing Area:

Set up a game area in a certain room of the house to help keep the nerf darts from flying everywhere.

Play solo or team based.

Use any type of blaster: These games can be played with any type of nerf blaster, just make sure each team uses the same, whether it’s a nerf rival, single shot blaster, or double shot blaster if you are keeping track of points/time.

We have two main rules when it comes to Nerf wars, one is to not aim for the head, and the second is to always wear eyewear. I purchased these clear glasses on Amazon, a pack of 10 costs about $14. The small size was a good fit for 6-9 year olds. 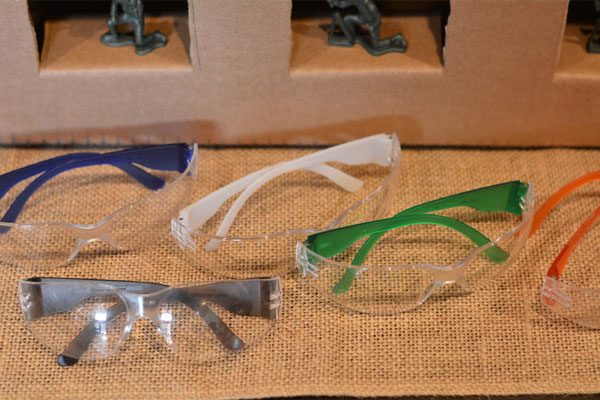 Planning a Nerf Party? Check out our other fun Nerf Party Ideas including how to make Nerf Cake, party supplies, and party food.